Virat Kohli is the greatest limited overs batsman in history. He is also amongst the greatest Test batsmen in India’s history and in the top 5 in the world during the last decade. While the Indian captain has scored runs all over the world one of his parameters of greatness is his domination and record at home. Kohli has a stunning record in India and has been the playmaker for India batting at number 4 in Test cricket. He is one of the main reasons why India remains undefeated in a series at home since the end of 2012 and has only lost one solitary Test match in this time-frame.

India vs England: Virat Kohli Sweats it Out in Hotel Room Ahead of First Test

Kohli has an aggregate of 3558 runs in 39 Tests in India. He has recorded 13 hundreds and 10 fifties at home. His average of 68.42 is, by far the highest at home for an Indian batsman (min. 1500 runs). The second-highest is Cheteshwar Pujara a fair distance away at 59.84. That is how good Kohli has been in India on top in a league of his own.

Kohli has an excellent conversion rate (50s to 100s) and it is the second-best (after Murali Vijay) amongst all Indian batsmen with a minimum of 2000 runs at home. THE BEST IN THE WORLD IN HOME CONDITIONS SINCE 2016

Kohli has scored 2499 runs in just 22 Tests (34 innings) at home since the 1st of January, 2016. His average of 86.17 in this time-frame is by some miles the best for an Indian batsman – the second-best Pujara at 56.85. Not only has Kohli been the best batsman in India but also the most prolific one in home conditions when compared with the best around the world in the last 5 years.

Kohli’s average in India since 2016 is significantly higher than any other batsman’s in home conditions (min.1000 runs and 15 innings) in this time-frame. He is better than David Warner and Steven Smith in Australia and Kane Williamson in New Zealand. In fact, Kohli has scored almost 20 runs per dismissal more in India than Smith (in Australia) and Williamson (in New Zealand) – this is a staggering statistic and shows the sheer volume of runs scored by Kohli during the last 5 years.

Not only has he piled on the runs but done so at an alarming strike rate. Kohli’s strike rate in India since 2016 is as high as 68.05. Just for perspective, the swashbuckling Warner who comes with a reputation has a strike rate of 68.9 in Australia in this period. Thus, not only has Kohli amassed the big runs but done so at a very high run rate – it showcases the authority he has had over the best in the world demoralizing opposition bowlers and also creating time for the Indian bowlers to clean up the opposition twice.

Kohli’s Conversion Rate (10 hundreds and 3 fifties) in India since 2016 is also the best in the world in home conditions in this time-frame. Not only has he scored the big hundreds and been impossible to dislodge once past fifty Kohli has also gone on to record the maximum number of double hundreds in home conditions in this time-frame. No one has scored more 200-plus scores at home than Kohli’s 6 in these 5 years. He is followed by Williamson (3). 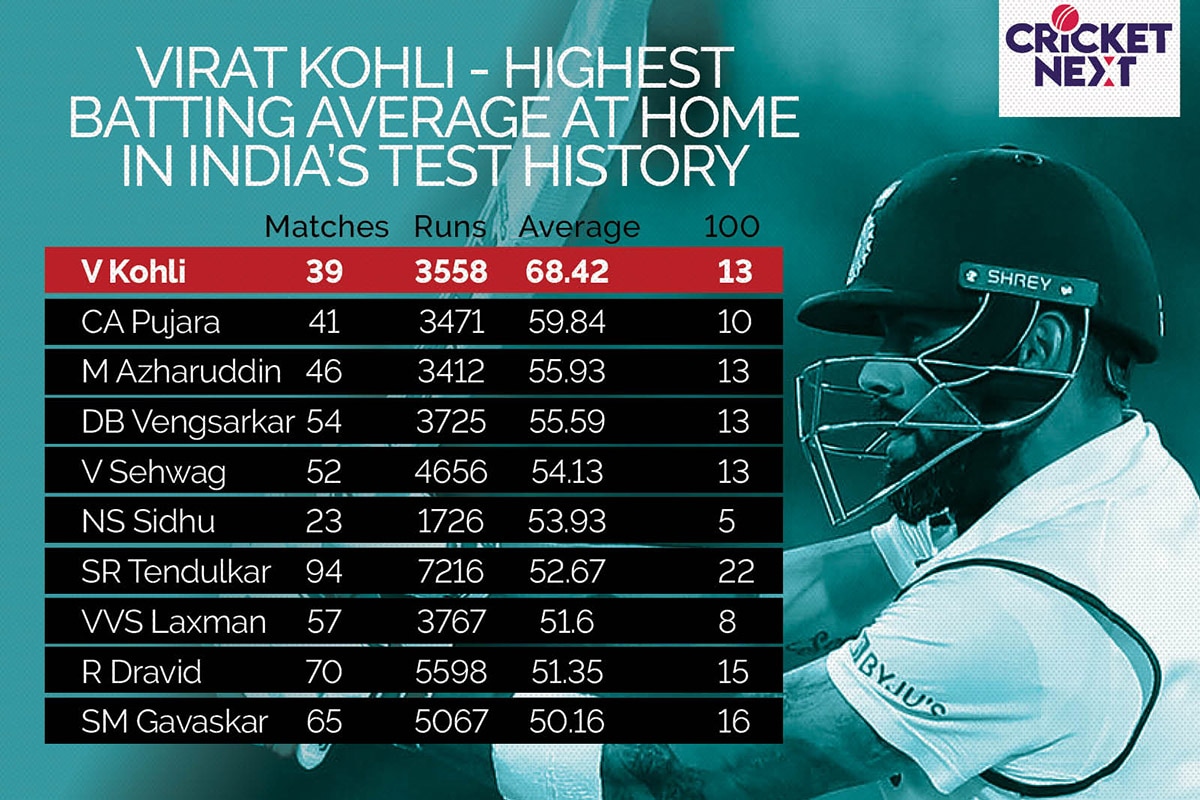 STUNNING PERFORMANCE IN HOME SERIES SINCE 2016

Kohli has been in devastating form in all the home series since 2016 failing in just one – against Australia in 2017. He scored 309 runs in 3 Tests against New Zealand in 2016. He amassed 655 runs in a five-Test series against England later in the year. Kohli averaged a stunning 109.16 and registered two hundreds in the series. He followed that up with another great performance against Sri Lanka the next season – aggregating 610 runs in 3 Tests at an average of 152.5 hammering three hundreds in the series. Kohli’s aggregate against England and Sri Lanka are ranked at number 2 and 3 as the maximum runs scored in a home series by an Indian batsman. Kohli also scored 317 runs in three Tests (4 innings) against South Africa in 2019.

Kohli’s best performance in a match-context during this time-frame came in the second Test against England at Visakhapatnam in 2016. Coming in to bat at 22 for 2 in the first innings, he put together a double hundred stand with Pujara changing the course of the match. Kohli scored 167 off 267 deliveries. His 81 in the second innings was even more special – he came out to bat at 17 for 2 and wickets continued to fall at the other end. Kohli continued to play his shots and scored more than half of India’s runs by the time he was dismissed facing just 109 deliveries.

India has won all the home series since 2016 sweeping as many as 4 of them. They have lost just one solitary Test during this period. Kohli has played the leading role with the bat and been their talisman in this period of unprecedented domination at home by India. He has been the dominating batsman in one of the most dominating displays by a team in home conditions in Test cricket history.

Add to this his captaincy record and leadership skills and King Kohli has reigned supreme in India over the last few years.