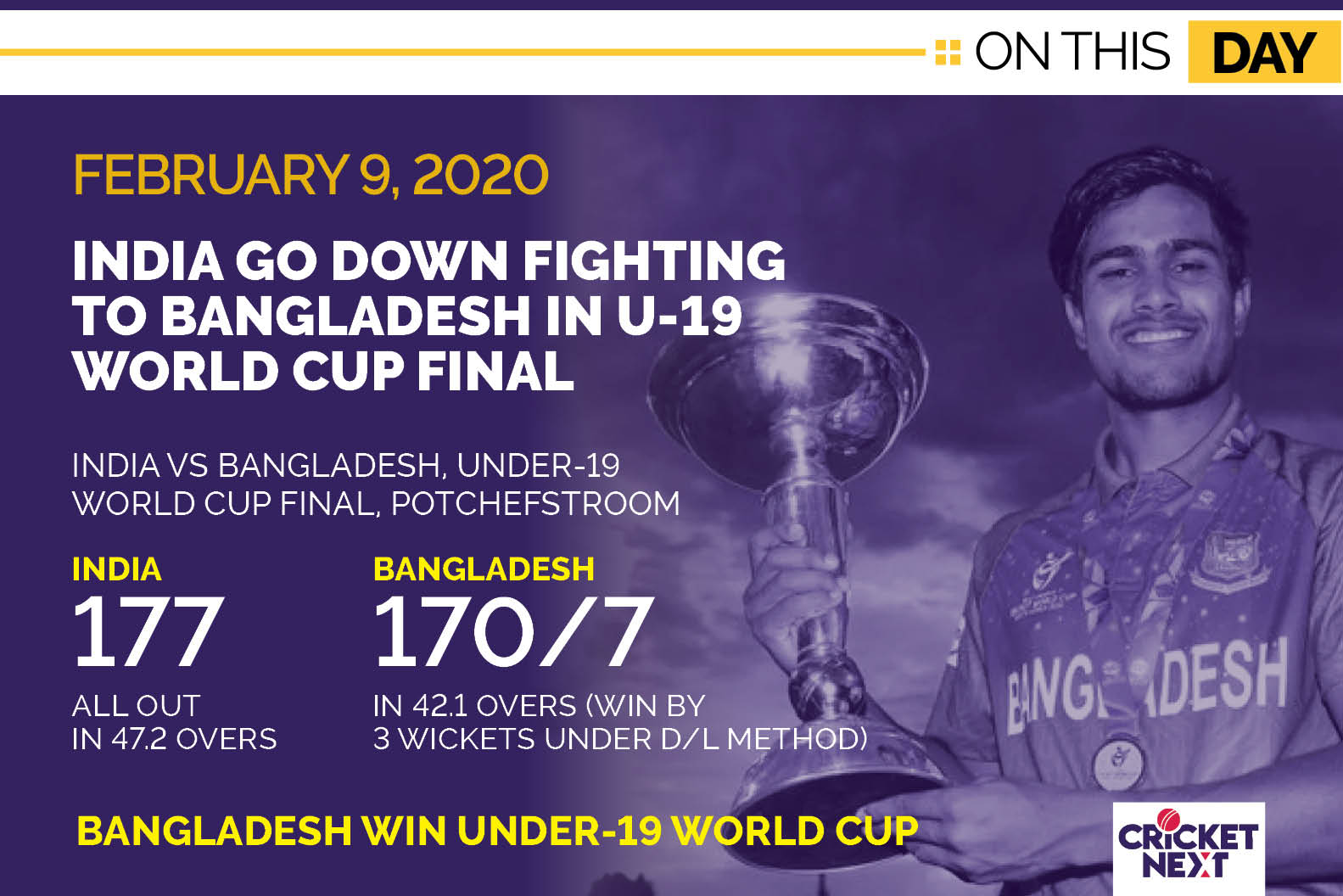 It was the big final between India Colts and their Bangladesh counterparts – the Under-19 World Cup Final 2020 at Potchefstroom in South Africa. Akbar Ali won the toss and elected to field first. India lost Divyaansh Saxena early in the innings in the seventh over. The batsman of the series, Yashasvi Jaiswal and Tilak Varma put together a solid 94-run stand for the second wicket before the latter was dismissed for a 65-ball 38.

Skipper Priyam Garg followed soon after for just 7 to reduce India to 114 for 3 in the 32nd over. Meanwhile Jaiswal continued to mix caution with aggression and looked a class apart – like he had throughout the tournament. He became the fourth Indian batsman to be dismissed after scoring a fine 88 off 121 deliveries including 8 fours and a six. The stylish left-hander had scored 56.41% of India’s total of 156 when he parted in the 40th over.

India collapsed and were bowled out for 177 in the 48th over. They had lost their last 7 wickets for just 21 runs. Shoriful Islam bagged two wickets and conceded just 31 runs in his 10 overs. Tanzim Hasan Sakib also picked two while Avishek Das returned with three wickets.

The Bangladesh openers, Parvez Hossain Emon and Tanzid Hasan gave their team a rollicking start adding 50 in under 9 overs. Ravi Bishnoi gave India the first breakthrough when he dismissed Hasan for 17. Bishnoi then bamboozled the Bangladeshi middle order and reduced them to 65 for 4 in the 17th over. Sushant Mishra bagged two to leave Bangladesh reeling at 102 for 6 after 23 overs. But opener, Emon and Akbar Ali led the fightback adding 41 for the seventh wicket.

After Emon’s exit, the skipper found an able partner in Rakibul Hasan (9 not out in 25 balls) to take Bangladesh to a stunning three-wicket win chasing down the revised target of 170 in 46 overs (Duckworth-Lewis Method) with 23 balls to spare. Ali remained unbeaten on a match-winning 43 off 77 deliveries. He was adjudged the Player of the Match as Bangladesh went on to register a historic win over favourites India,

India played a great tournament and almost pulled it off in the final. Bishnoi returned with 4 wickets but their Player of the Tournament was Yashasvi Jaiswal who aggregated 400 runs in 6 matches hammering one hundred and 4 fifties in the tournament.

India vs England LIVE Streaming: When and Where to Watch Ind vs Eng Today’s 4th Test Match Online