India vs England 2021: The Numbers Do Lie – Dom Sibley’s Hardwork, Determination and Temperament Speaks for Itself 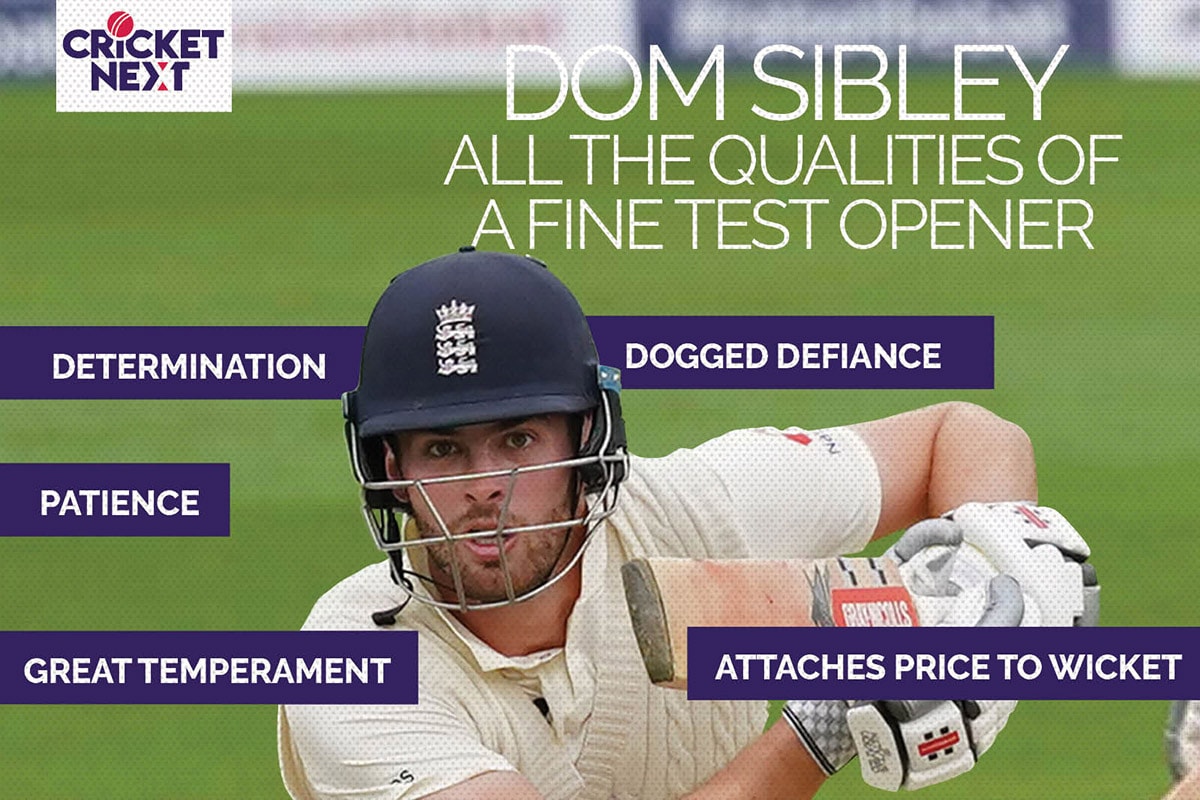 On the face of it the Test figures of Dom Sibley, the England opener are pretty ordinary – 851 runs in his first 15 Tests at an average of 37. Nothing to write home about in international Test cricket. But that is the thing about averages – they often do not tell the entire story and in Sibley’s case not even half the story! Sibley has produced four series-defining/changing performances with the bat in difficult circumstances under pressure in four different series for England since his debut in November, 2019. And this dogged, determined effort at the top of the order negotiating the new ball when others have failed around him has defined his short career so far.

India vs England 2021: Axar Should Replace Nadeem & Kuldeep Must Play in Place of Sundar in Second Test in Chennai

England were 0-1 down in the four-match series in South Africa in 2019. The second Test in Cape Town was evenly balanced after the first innings. The visitors needed a big performance with the bat in the second innings. England lost Zak Crawley early in the innings but Sibley put his hands up and carried his bat through the innings. He remained unbeaten on a dogged and defiant 133 off 311 deliveries spending 497 minutes at the crease. Sibley forged meaningful partnerships with Joe Denly, Joe Root and Ben Stokes and powered England to a big third innings score. They went on to win by 189 runs and levelled the series.

He again combined with Crawley in the fourth and final Test in Johannesburg and gave England a solid start in the first innings. The pair added a century stand before Sibley was dismissed for a well crafted 44. England scored 400 and dictated terms in the match thereafter going on to win the series 3-1.

England were again in trouble in the second Test against the West Indies in Manchester in 2020. 0-1 down in the series they were reduced to 29 for 2 and then 81 for 3 losing Root. Sibley defied the likes of Roach, Gabriel and Joseph and resurrected the innings with Ben Stokes. He was at his defensive best leaving a number of deliveries outside the off stump batting cautiously attaching a price on his wicket. While Stokes accelerated Sibley stood like a rock at the other end.

The pair batted West Indies out of the contest with a brilliant 260-run stand for the fourth wicket before Sibley was dismissed for 120. He had defied the West Indian bowlers for 372 deliveries and 556 minutes – it requires a lot of skill, character and temperament to bat for such long periods without losing your concentration. The home team went on to win the match and level the series.

After failing in the first three innings across the two Tests in Galle, Sibley delivered when it mattered most – again when most around him had failed. Chasing 164 in the fourth innings of the second Test, England lost Crawley, Bairstow, Root and Lawrence and were in deep trouble at 89 for 4. But the barrage of spinners from Sri Lanka could not get through the defences of one man – opener Dom Sibley. He soaked in the pressure of wickets falling around him and in tough hot and humid conditions remained unbeaten on a match-winning 56 off 144 deliveries.

Sibley hit just two boundaries and scored the rest of the runs by placing the ball in the gaps for the ones and twos – classic old-school attritional Test match batting – a testimony of his disciplined batting, fitness and mental endurance. He put together an unbeaten 75-run match-winning and series-winning partnership with Jos Buttler as England swept the series 2-0.

Sibley was again at it against the likes of R Ashwin and co. in India – considered the toughest venue to bat for overseas batsmen especially from SENA countries. But in his very first innings in the country, Sibley showed his class and defied the likes of Bumrah, Ishant Sharma and Ashwin, again pulled England out after they lost two wickets at the score of 63 and stitched the partnership which defined the match for the visitors – a brilliant 200-run stand for skipper Joe Root. Sibley was finally dismissed for 87 but after he had tired the Indian attack and broken their backbone having faced 286 deliveries and spending 382 minutes in the middle. Sibley is a fast learner. After being all at sea against spin in the first three innings in Sri Lanka he displayed great character and temperament to produce two match-changing fifties in Galle and Chennai. He took a long stride forward to defend, rocked back confidently to dap the ball for a single, used his feet to clip the spinners through mid-wicket and copied Root successfully and played a few sweep shots of his own. Sibley picked the length of the Indian spinners beautifully making giant strides from his tour to Sri Lanka.

Sibley played on the front foot just 43 per cent of the time in Sri Lanka but took that percentage up to 71 per cent in his innings against India in Chennai. He also learnt from his mistakes in Sri Lanka and applied himself better in Chennai – Sibley’s false shot percentage stood at just 7.5 per cent during the series opener, the lowest it had ever been in a Test innings in which he had registered a half-century.

From facing a total of 34 deliveries in his first three innings in Sri Lanka, Sibley faced 144 and 286 in his next two innings in Galle and Chennai. What he lacked in talent he more than made up through sheer grit, determination and dogged defiance and temperament. He attached a price to his wicket – a big price – a great quality for a Test opener.

While he may not have the class of Joe Root or the power of Ben Stokes and does not make for pretty batting, Dom Sibley through sheer will power and hardwork has been mighty effective and played a big hand in England’s recent domination in Test cricket.