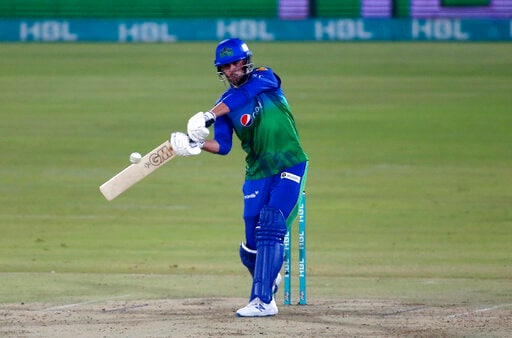 KARACHI, Pakistan: Englishman Tom Kohler-Cadmore struck a half century on his debut in the Pakistan Super League and led Peshawar Zalmi to a six-wicket win over Multan Sultans on Tuesday.

Kohler-Cadmores 53 off 32 balls led Peshawar to its highest-ever chase in the PSL 197-4 with an over to spare. Young Haider Ali finished off the game quickly by smashing a quickfire unbeaten 25 off only eight deliveries.

It was the fifth successful chase in this edition of Pakistans premier Twenty20 league as the teams opting to field first after winning the toss have finished on the right side of the result.

I just chanced my arm and luckily it came off and we got the win, Kohler-Cadmore said. I just try to give my all to the team and if I can influence a game in the field, then thats great.

Earlier, Kohler-Cadmores countryman James Vince transformed his Big Bash form with a 55-ball knock of 84, including nine fours and three sixes and carried Multan to 193-4 after being put in to bat.

Vince featured in two solid half-century stands, adding 82 runs with captain Mohammad Rizwan (41) and another 71 runs with Pakistan international Sohaib Maqsood, who made 36 off 21 balls.

Captain Wahab Riaz had a forgetful game as the left-arm fast bowler conceded 51 runs off his four overs without taking a wicket and conceded five fours and three sixes.

Another Englishman, Saqib Mahmood (2-36), was the pick of Peshawar bowlers as the fast bowler had the wickets of Maqsood and Vince in successive death overs.

Maqsood gloved a short ball to wicketkeeper and Vince was sharply caught at square leg by tall Mohammad Irfan in the penultimate over.

Pakistan discard Kamran Akmal set the tone for Peshawars run-chase with 37 off 25 balls before he fell lbw to Usman Qadirs googly.

Kohler-Cadmore, who hit six fours and a six, and Imam-ul-Haq (48) kept Peshawar in the hunt with a 77-run partnership before Multan hit back through little-known fast bowler Mohammad Shahnawaz (2-44), playing his first Twenty20.

Imam was run out while going for a needless second run and Shahnawaz struck twice in the 17th over by claiming two wickets. Sherfane Rutherford was neatly caught at point by West Indies Carlos Brathwaite and two balls later Kohler-Cadmore sliced a short ball to point.

But Shahnawaz conceded 24 in his last over as Haider and Shoaib Malik smacked him for three sixes to hand Multan its second successive loss in the tournament.

EXCLUSIVE: Prithvi Shaw Was Determined to Make a Statement After Failing in Australia – Ramesh Powar