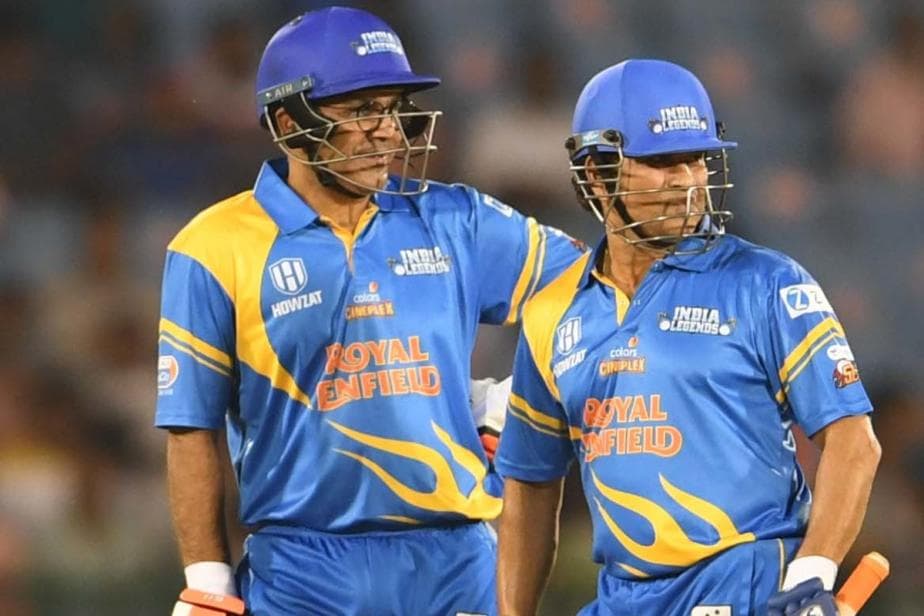 India Legends were off to a flying start in the Road Safety World Series T20 by comfortably beating Bangladesh Legends by 10 wickets at the Shaheed Veer Narayan Singh International Stadium in Raipur on Friday evening. The night belonged to the Indian legends Virender Sehwag and captain Sachin Tendulkar as they turned the clock back with their class batting act as the duo with their unbeaten 114-run opening partnership saw India achieve an easy target of 110 runs in 10.1 overs. In the successful chase, Sehwag made an entertaining 35-ball 80 with 10 boundaries and five massive sixes while captain Tendulkar played the second fiddle to the Nawab of Nafagarh with 33 (26balls, 5×4). It was a Sehwag show from the word go. He slammed Mohammed Rafique in the very first over for 19 runs which included three boundaries and a huge six. The first over read 4, 4, 6, 0, 4, 1.

He was ruthless in his approach and did not spare even the good balls of Bangladesh bowlers.

The Delhi batsman completed his half century in a typical Sehwag way with a six off seamer Alamgir Kabir.

‘Sachin Tendulkar Told Me to Finish Quickly, So I Was in a Hurry’ – Virender Sehwag

It was a matter of time that India finished the game after Sehwag completed his milestone. He eventually saw the team through with a shot over the ropes off medium pacer Khaled Mashud.

Earlier, Bangladesh chose to bat first after winning the toss under lights. But they couldn’t live up to their own expectations of batting well on a slow wicket and were folded out for 109 in 19.4 overs.

Opener Nazimuddin was the highest scorer for Bangladesh with 49 off 33 balls including eight fours and a six followed by Javed Omar (12) and Rajin Saleh (12).

Rest of the Bangladesh batsmen fell for single digit scores.

Bangladesh were off to a decent start with both openers Nazimuddin and Omar stitching a 59-run stand for the first wicket.

However, once Ojha got the first blood by getting Omar out in the eight over, rest nine wickets fell for 50 runs.

On a slow wicket, the Indian spinners did well to keep the runs in check which resulted in Bangladesh batsmen throwing wickets one after another and eventually ended up making 109