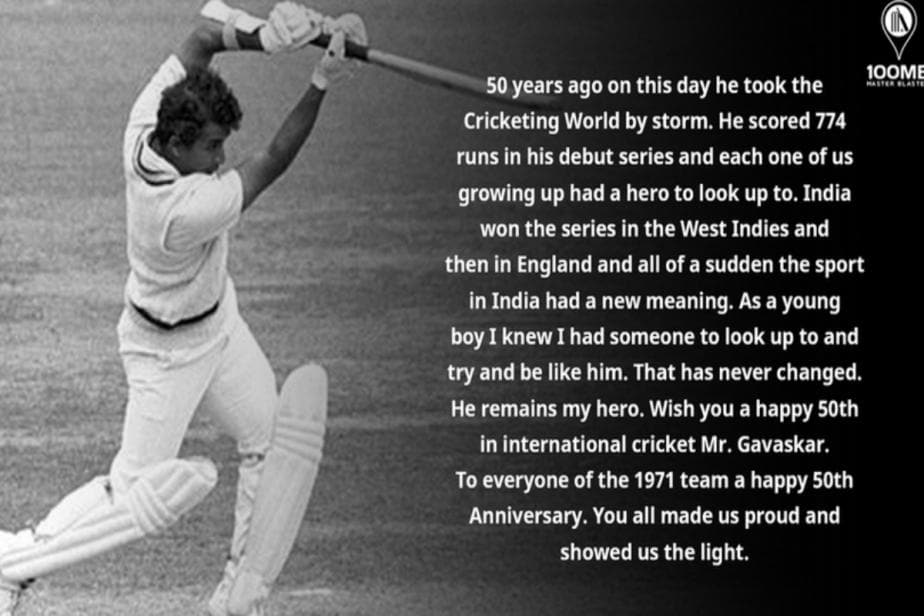 Master blaster Sachin Tendulkar on Saturday paid a heartfelt tribute to his idol, Sunil Gavaskar, who made his Test debut against West Indies on this day in 1971. Sharing a photograph of Gavaskar in which the legend is seen playing a straight drive, Tendulkar said fifty years ago, “he took the world by storm”, scoring 774 runs in his debut series.

It was due to Gavaskar’s heroics that India first won the series in West Indies and then in England, lending the sport a “new meaning”, Tendulkar said.”As a young boy, I knew I had someone to look up to and be like him,” Tendulkar, one of the best players to have played the game, said, adding, Gavaskar remains his hero to this day.

Besides wishing Gavaskar, who completes fifty years since his debut for India, Tendulkar extended his wishes to other team members who made the country proud following their victory over the mighty West Indies.

On Saturday, speaking to Star Sports, Gavaskar said he can’t believe it’s been five decades since he played his first game for India.

“Every school kid’s dream is to play for India. That was my dream as well,” Sunil Gavaskar told Star Sports.The “little master” said he was handed the blazer and sweaters before the start of the tour but he didn’t wear them until he stepped on the field representing the country.

“To put it on Day 1 was just an amazing, amazing feeling,” he said.During his 16-year illustrious cricketing career, Gavaskar scored 10,122 runs in 125 test matches at an average of over 51. The “little master”, as he was referred to during his heyday, scored 34 centuries in the longer format of the game, which remained a world record for decades. Interestingly, it was Sachin Tendulkar who went past not just the world record in terms of runs but also centuries.

Tendulkar played 200 matches for India, scoring a staggering 15,921 runs at an average of nearly 54 per innings. The former Indian captain hit 51 centuries in his career that lasted 25 years. In ODIs, Gavaskar had 3092 runs in 108 games, averaging 35.13.There are more reasons why Gavaskar is referred to as the best batsman of his generation. While technology and protective gear have made the lives on the cricket field a lot easier for modern players, Gavaskar played in an era with no helmets. Not to forget West Indies had the best fast-bowling line up in the game, the reason they remained a dominant force for nearly two decades.