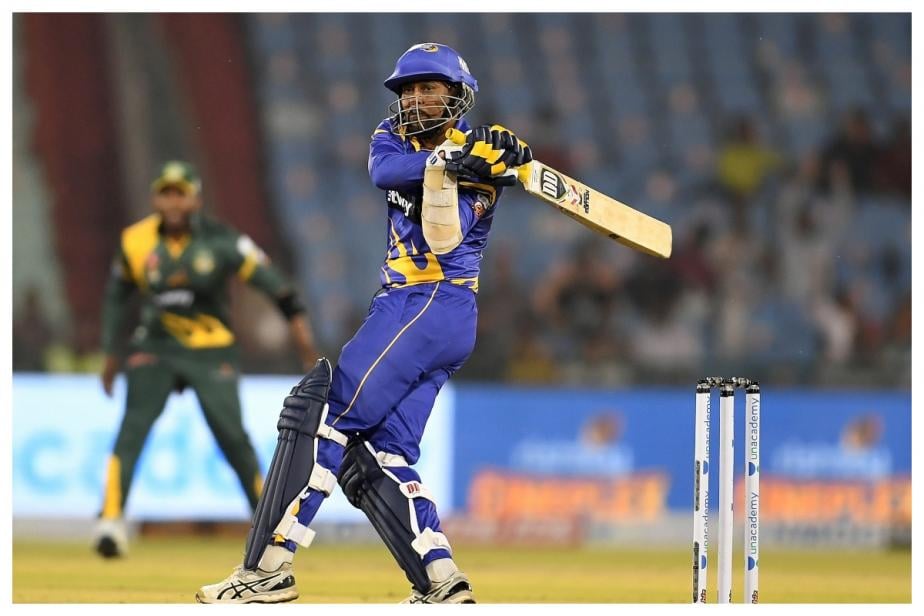 Sri Lanka Legends captain Tillakaratne Dilshan led by example not just with bat but with the ball too as his all-round show helped the team from Emerald Isle register their third win of the Unacademy Road Safety World Series T20 at the Shaheed Veer Narayan Singh Stadium in Raipur on Monday evening.

Dilshan slammed an unbeaten half century off 40 balls including seven fours after his economical bowling of 1/11 from four overs helped Sri Lanka beat South Africa Legends by 9 wickets.

Chasing South Africa’s 89 all out, Dilshan and Upul Tharanga (27, 31b, 5×4) added 69 runs for the second wicket that saw Sri Lanka achieved the target with 40 balls to spare.

With Sri Lanka needing two runs to win and Dilshan four for his half century, the stylish batsman swept South Africa off break Thandi Tshabalala for a boundary and helped Lankans finish the game at 92/1.

Sri Lankans, with three wins and one defeat from four ties, are now behind India Legends with 12 points. Earlier, Sri Lanka Legends, who opted to field first, put up a brilliant show with the ball as they bundled South Africa out for 89 in 18.5 overs.

Left-arm spinner Rangana Herath, seamer Nuwan Kulasekara and Sanath Jayasuriya took two wickets each. However, it was Herath and Dilshan’s choking line that hurt South Africa the most.

South Africa’s No.3 Andrew Puttick turned out to be the highest scorer with a 46-ball 39 that included four boundaries.

The South Africans never looked settled from the beginning as they lost their first wicket on the very first ball of the match after a bad call between openers Loots Bosman and Alviro Petersen (0) which cost them a run out of the latter in captain Dilshan’s over.

In dire need of a partnership, South Africa couldn’t get one as wickets kept falling on one end while Puttick held the fort from the other.

The only major stand was 31 runs for the fourth wicket between Puttick and Zander de Bruyn (15) before Herath got the latter leg before wicket.

Once Puttick was gone, thanks to Jayasuriya, it was almost over for South Africa. Even captain Jonty Rhodes (2) failed to put up a show and got out to Dilshan edging one to wicket-keeper Upul Tharanga.

South Africans eventually were back in the dug-out at the score of 89.

India vs England 2021: Virat Kohli is One of The Best I’ve Ever Seen, Says Stuart Broad

No Clarity on IPL 2021 Venue as of Now: SunRisers Hyderabad Mentor VVS Laxman