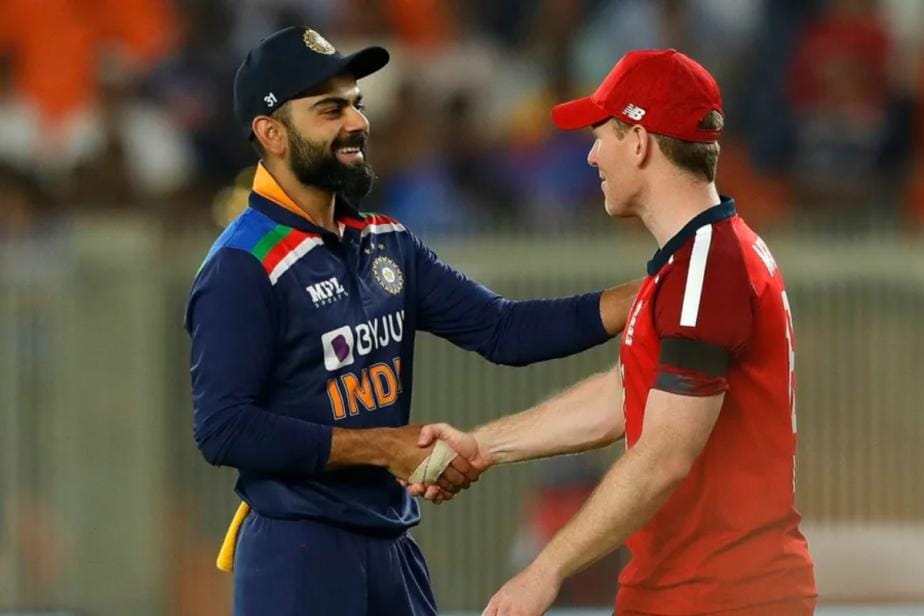 England thrashed India by 8 wickets in the series opener at Motera in Ahmedabad on Friday to give an early reminder to the hosts as to who bosses the world in limited overs cricket. Yes, the visitors had a plan of playing aggressive and attacking cricket – the brand that has seen them win the 2019 World Cup at home and become the number 1 ranked team in both ODIs and T20Is dominating the formats in the last couple of years. But England did one more thing right. To execute their perfect plan they put out the perfect XI – their best combination which proved to be too good for India in all three disciplines on the day.

India made a strategy blunder. In a bid to find that ideal combination for the World T20 in October they experimented a bit too early in the series. The biggest sin they committed was at the top of the order by resting Rohit Sharma for the first couple of matches – this after Virat Kohli had already announced that Rohit will open with KL Rahul and Shikhar Dhawan would be the reserve opener. This apparent last minute decision to ‘rest’ Rohit is not going down well with the Indian fans and cricket pundits.

One does not give a break to the best player and the biggest match-winner in the XI in the first match of a marquee series. It is bad tactics given England are India’s biggest challengers for the coveted trophy in October-November. The hosts cannot and should not give England easy victories – that too at the start of the series. This England team is ruthless and with that early momentum has the ability to sweep the series 5-0 which will be a massive disaster for India.

India is in a bit of a quandary now. Having already announced that Rohit will rest for the first couple of matches they will have to swallow their pride if he is to be included in the XI for the second match on Sunday. If anyone knows a bit or too about the personality of Virat Kohli and Ravi Shastri, then Rohit will indeed be rested from the second match too. This will be a bigger disaster as India will again not go with their best XI in a match they can ill afford to lose.

The home team went in with the right approach in the first encounter though – to go all-out all guns blazing right from the word go. This was a departure from their earlier method of starting somewhat cautiously and then accelerating after getting a start. India realised that they had to change their model if they consistently wanted to beat the likes of England and West Indies in the format. Both these teams have built their success on one basic mantra – to go helter-skelter in the batting from the top of the order right till the lower-order. They have filled their line-ups with batting superstars and are relentless in their attack throughout the innings. They can afford to do so as they bat deep right down till number 9 and 10.

India decided to take the same approach – and had the right mindset – and with the likes of Rishabh Pant, Hardik Pandya and Washington Sundar in the lower-order, could afford to do so. It is a different issue that they could not execute the plan but they should not be faulted for intention. They should adopt the same strategy for the rest of the series and devise a method to execute – have smaller targets to achieve the larger goal.

India would need a big score from one of KL Rahul or Virat Kohli. Rahul has been in devastating form as an opener for his country and his franchise Punjab Kings in the last three editions. Kohli desperately needs a big score and that one great innings to change his batting fortunes. He has been a bit out of touch since 2020 and it is time he makes it count.

India may want to get in T20 specialist Deepak Chahar who has an exceptional record in the powerplay in place of Shardul Thakur who tends to be expensive in the format for the second match. It would also be interesting to see whether India again try Yuzvendra Chahal in the powerplay. He was taken for a few by Jason Roy and only came back into the attack after the fielding restrictions were relaxed. India have traditionally used Chahal as their playmaker with the ball in the middle overs – where he stems the flow of runs and gets crucial opposition wickets. This is unlike an Adil Rashid who is often used in the powerplay and is both a wicket-taker and restrictive in that phase of play.

England had a near perfect game – a strategy which has worked brilliantly for them for the last couple of years again executed to perfection. Unlike India, the visitors played their best and strongest possible XI and were relentless. The bowling was brilliant with everyone putting their best foot forward. Rashid and Jofra Archer make a very potent new ball pair who are both restrictive and pick up early wickets. They bowled a combined 4 overs conceding just 18 runs picking two wickets in the first six overs in the series opener.

Jason Roy was in fine hitting form in the first match and expect nothing less from the opener who has a strike rate of 144.46 in T20I cricket. Dawid Malan would be England’s playmaker in the middle order and with Bairstow, Morgan and Stokes expect fireworks all the way from this line-up.

Chris Jordan is a T20 specialist with several tricks up his sleeve. He has a number of variations and can also surprise the batsman with his pace and bounce. Mark Wood is the fastest bowler in the XI well capable of consistently bowling in excess of 150 kms per hour. Sam Curran adds variety to the attack with his clever left-arm medium fast bowling.

India should ideally draft in Rohit Sharma but having rested him for the first couple of matches how do they manage the optics? Deepak Chahar may come in for Shardul Thakur.

India lead the head to head 3-2 in the last five matches.

To watch out for:

KL Rahul has been in scintillating form in T20 cricket. He did not have a great first match but expect the stylish opener to produce the big score in the second match in Ahmedabad.

India: We just weren’t aware enough of what to do on that kind of pitch. Lack of execution of some of the shots is something we have to address as batsmen – Virat Kohli after the crushing defeat in the first match.