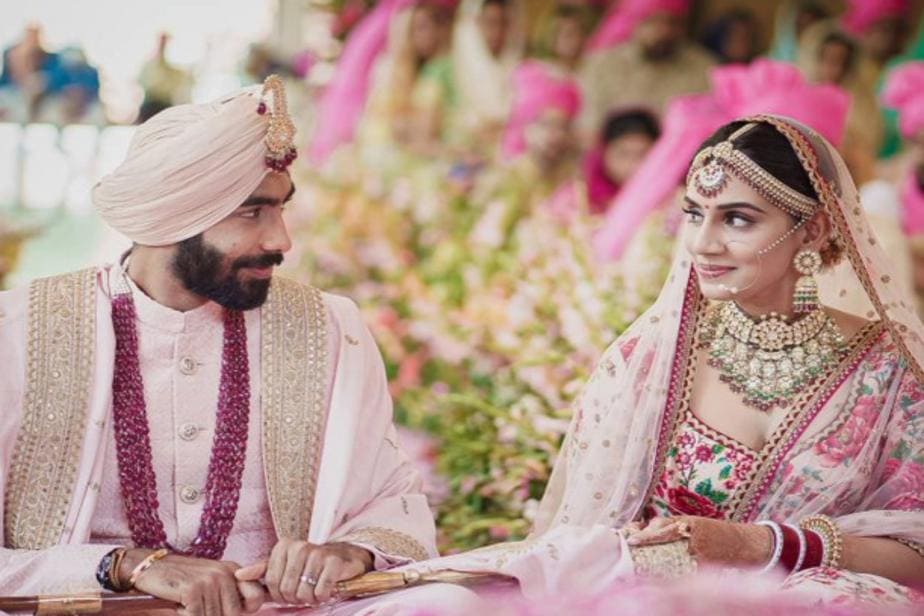 India pacer Jasprit Bumrah got hitched to Sports Presenter Sanjana Ganesan. There were talks that the couple will get married this week only. Now, the 27-year-old has come out and posted a tweet on social media account where he shared his picture alongside his bride.

“Love, if it finds you worthy, directs your course.”

Steered by love, we have begun a new journey together. Today is one of the happiest days of our lives and we feel blessed to be able to share the news of our wedding and our joy with you.

As news of Jasprit Bumrah’s wedding with TV presenter Sanjana Ganesan intensified, an old tweet of the anchor has added a little fuel to the fire. A tweet from two months ago has resurfaced where she had retweeted a tweet from a sports website which showed Bumrah’s mood during a Test match.Ganesan had taken to Twitter to have a little fun and retweeted the photo with a caption,”Jasprit Bumrah’s on-field moods & my daily mood swings look exactly alike,” back in January this year. The tweet perhaps came into prominence because of a fan congratulating her on the rumoured marriage with the Team India pacer, who was left out of the T20I squad as well as the fourth Test against England on personal grounds.

“He informed the BCCI (Board of Control for Cricket in India) that he is getting married and has taken the leave to help in preparations for the big day,” news agency ANI had quoted a BCCI source as saying.However, so far, nothing has been confirmed officially by any member of the board with regards to Bumrah’s marriage plans.

Sanjana, 28, has recently grown into prominence since becoming a TV presenter for India’s matches and has also worked with Indian Premier League (IPL) team Kolkata Knight Riders (KKR) during the IPL season.She first rose to prominence in 2014 when she was crowned Miss India and then went on to take part in TV reality show MTV Splitsvilla.