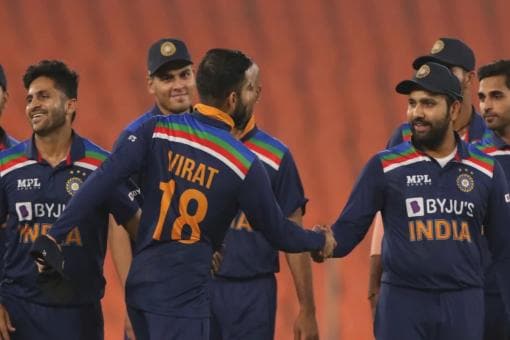 India broke the trend in the fourth T20I against England – they lost the toss, batted first and yet won the encounter. In the previous three matches, the captain winning the toss had decided to chase and was victorious. That meant that the home team would clash with England in the series decider at the Narendra Modi Stadium at Motera in Ahmedabad on Saturday. Playing a big-match like a knockout of a tournament or a series-decider brings with it its own pressure, challenge and expectation. The best in the business fail to perform in the matches that matter the most.

We look at India’s record in big series deciders in the last few years and the players who stand out.

India has won as many as 8 of the 9 bilateral series-deciders they have played since the 1st of January, 2016. They lost the opening match to Sri Lanka in Pune in 2016 but drew level at Ranchi before some spectacular spin bowling from R Ashwin (4-8 in 4 overs) routed Sri Lanka for 82 in the decider at Visakhapatnam. Ashwin took the new ball and saw the back of the top 4 Sri Lankan batsmen within the powerplay to reduce the visitors to 20 for 4 in the fifth over. He started the innings with a bang getting rid of Dickwella and Dilshan in the very first over of the match. Sri Lanka could never recover from the initial setback.

India then put the disappointment of losing to Zimbabwe by two runs in the first match in Harare by thrashing them by 10 wickets to draw level at the same venue. Kedar Jadhav then rescued them top-scoring with 58 off 42 deliveries helping India post 138 for the loss of six wickets in the decider. A fine performance by the bowling unit meant that the visitors defended the small target and were victorious by three runs. Interestingly, Axar Patel was India’s most restrictive bowler in the match and Yuzvendra Chahal the most expensive going at 8 runs per over.

India’s impressive showing in series deciders also include two wins against England – they were beaten in the opener at Kanpur in January, 2017 but came back courtesy two stand-out performances in Nagpur. KL Rahul scored a magnificent 71 off just 47 deliveries even as wickets fell around him. He scored almost half of India’s total of 144. Jasprit Bumrah came up with an exceptional performance with the ball helping the home team defend the average total. He defended 8 runs off the last over of the match getting rid of Joe Root and Jos Buttler giving India a stunning win by five runs. Once again, the leg spinner, Chahal was India’s most expensive bowler of the match conceding 33 runs in his 4 overs.

India got the better of England in the decider at Bristol in the summer of 2018 too – Rohit Sharma was India’s star with the bat and remained unbeaten on a brilliant 100 off just 56 deliveries helping the visitors chase down a stiff target of 199 with seven wickets in hand and 8 balls remaining. Hardik Pandya came up with a fine all-round performance too picking four wickets before hammering a match-winning cameo 33 off 14 deliveries.

Bumrah was again India’s hero with the ball in the rain-reduced 8 overs a side decider at Thiruvananthapuram late in 2017. He returned with the wickets of Munro and Nicholls and conceded just 9 runs off his two overs as India defended a total of 67 by six runs.

Suresh Raina was India’s highest impact batsman with 43 off 27 balls as they posted 172 for 7 in the decider in Cape Town in 2018. Bhuvneshwar Kumar was exceptional with the new ball getting rid of Reeza Hendricks while also being very economical giving away just 24 runs in his 4 overs.

Interestingly, the only time India lost in a bilateral series decider in this time-frame was in early 2019 when they were beaten by New Zealand in a thriller at Hamilton. Chasing 213, Vijay Shankar (43 off 28 balls), Hardik Pandya (21 off 11 balls) and Rishabh Pant (28 off 12 balls) gave India the platform before Dinesh Karthik (33 not out off 16 balls) and Krunal Pandya (26 not out off 13 balls) almost pulled off a stunning victory. The visitors ended with 208 for 6 going down by a mere four runs.

KL Rahul and Shreyas Iyer were the stars with the bat in the series win against Bangladesh in Nagpur in November, 2019. While Rahul recorded 52 off just 35 deliveries, Iyer smashed 62 off just 33 deliveries with five massive sixes. Deepak Chahar then produced the best bowling performance in T20I cricket history returning with magical figures of 6-7 in 3.2 overs to clean up Bangladesh for 144. Again, Chahal was tonked around and taken for 43 in his 4 overs.

India then posted the third-highest total in their T20I history hammering 240 for 3 in the decider against the West Indies in Mumbai in 2019. The highest impact player of the match was Rahul who, opening the innings, top-scored with a scintillating 91 off just 56 deliveries. Rohit Sharma also smashed 71 off just 34 balls while Kohli blasted an unbeaten 70 off just 29. Chahar was again the pick of the Indian bowlers returning with 2-20 in his 4 overs. He bowled as many as 15 dot deliveries which was a spectacular feat given the target and the fact that he also bowled with the new ball in the powerplay. India won by 67 runs.

KL Rahul’s performance in the big matches stand out for India in the last few years. He has produced three match-winning innings with the bat in three series-deciders for India during this period. Deepak Chahar has also made the most of his opportunities and given two series-defining performances with the ball for India in this time-frame. Another very noticeable trend is the high economy rate of India’s ace leg spinner in three series deciders during this period.

Chahal has also been the most expensive bowler of the ongoing series against England conceding a number of boundaries in his spell. His economy rate has been rising alarmingly since 2019 and he is also not making the breakthroughs in the middle overs. Chahal was left out from the XI for the fourth match of the series.

This throws up interesting questions for the decider on Saturday. Will India persist with Rahul – the big-match player given his poor run in the series? Will they draft in Deepak Chahar as the extra seamer in the XI? And will Chahal continue to sit out given his problem with economy not only in this series but in big matches over the last few years?

Did Not See Myself Playing For So Long – Mithali Raj