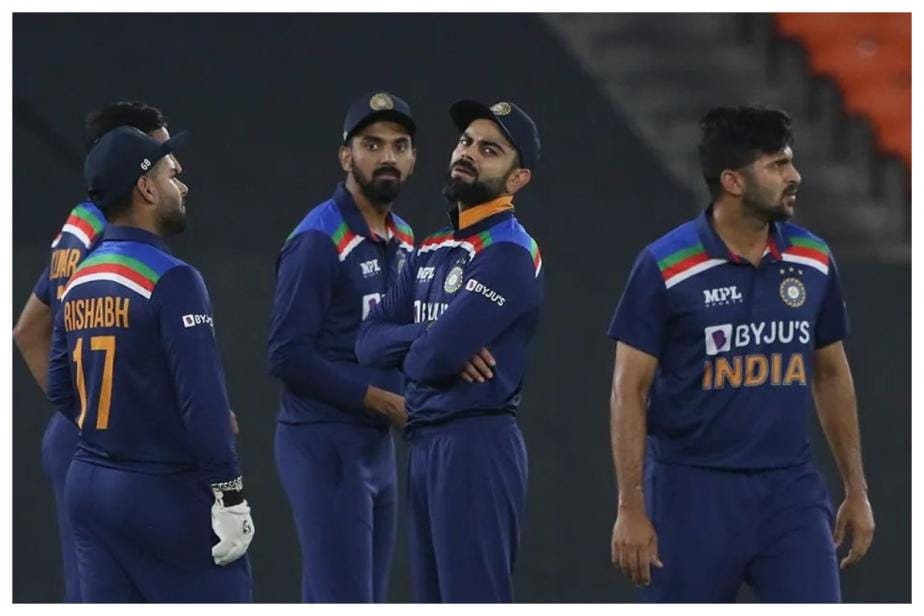 Having triumphed over the visitors in the Test series and the T20Is, the toughest challenge awaits India as they will take on the World Cup holders England in a three-match ODI series starting in Pune from Tuesday. England are the most dominant 50-over side in the world with the best win-loss ratio in the format since 2018. They are the number one ranked team in ODI cricket and a few points ahead of India who follow at number two. But with the focus currently on the back-to-back World T20 tournaments in 2021 and 2022, both the teams may just use this series as a platform to try out some new players and combinations for the shorter format.

India vs England: A Versatile Kohli Eases Back Into Form With New Purpose & Strategy

Both India and England would be without the services of some of their key players in the three-match series. The hosts are without their pace spearhead and one of the best in the world in the format – Jasprit Bumrah who is on personal leave. India will also be missing their wicket-taker Mohammed Shami and star all-rounder Ravindra Jadeja in the series.

England will also be without three key players. Jofra Archer has been ruled out of the series with an elbow injury while Joe Root and Chris Woakes have not returned to the squad after going back home post the Test series.

India have lost their last two ODI series in New Zealand and Australia and will want to return to winning ways.

The series provides the opportunity for India to give an extended run to two big players who were out of form in the T20I series against England. KL Rahul has registered three ducks in his last five T20I innings and Yuzvendra Chahal was their most expensive bowler in the just concluded series. Rahul has an excellent record for India in ODI cricket with 1332 runs in 34 innings at an average touching 46 and strike rate of almost 88. India have lately preferred him to play at number 5 from where he recorded a magnificent hundred against New Zealand at Mount Maunganui.

Chahal has been one of India’s biggest match-winners in the middle overs in 50-over cricket and his form in the T20I series notwithstanding, the leg spinner will be a different bowler in this format. Although he continues to be a wicket-taker his economy has been on the rise even in ODI cricket. Chahal has an economy rate of 5.96 since 2019.

It will also be interesting to see India’s batting order in the series. Rohit Sharma and Shikhar Dhawan are the star openers. The left-hander would be keen to make a statement after being left out for the better part of the T20I series. He is an outstanding batsman in the format and one of the greatest openers in the history of ODI cricket. Virat Kohli has made the number 3 position his own which means that there is place for only one of Suryakumar Yadav and Shreyas Iyer at number 4.

The series will also give an opportunity to try out Rishabh Pant higher in the order. He was promoted to number 4 in the T20I series. Pant is yet to explode in the ODI format and this just might be his breakthrough series. India may also want to hand a debut to fast bowler Prasidh Krishna and Krunal Pandya early in the series.

The bowling will be led by Bhuvneshwar Kumar who was brilliantly restrictive in the T20I series. Mohammed Siraj should be the other pacer in the starting XI.

England have won 35 of the 55 ODI matches they have played since 2018. Their success has been built upon an all-out attack strategy in batting in which they have regularly piled on 300-plus totals in the format. England, like India, lost their last ODI series to Australia and would want to go back to being their dominating self.

Jonny Bairstow is England’s most prolific batsman in the format since 2018. He has an aggregate of 2215 runs in 48 innings at an average of 46.14 and strike rate of 109.11 including 8 hundreds. Jason Roy and Eoin Morgan also average close to 45 and strike at more than a run a ball in this time-period.

The absence of Joe Root will give an opportunity to Sam Billings to prove his mettle in the middle-order. He scored an impressive hundred against Australia in Manchester in 2020. Liam Livingstone with a strike rate of 99.48 in List-A cricket is likely to make his ODI debut in the series.

The England captain, Morgan has already stated that the series will be used to give a chance to some of the fringe players. Matt Parkinson, the leg break bowler will be included in the XI at some point in the series and left-arm seamer, Reece Topley may also get a look in.

Adil Rashid, who is the second-highest wicket-taker in the world in ODI cricket since 2018 with 78 wickets in 49 innings at an impressive economy rate of 5.65, will be England’s playmaker with the ball in the middle overs.

India is likely to hand an ODI debut to Suryakumar Yadav and play Rahul at number 5. Kohli may also unleash Prasidh Krishna on the English batsmen early in the series.

Sam Billings is likely to play in the middle order in place of Joe Root. Moeen Ali may return to the mix for England.

England lead the head to head 4-1 in the last five matches.

Shikhar Dhawan will be raring to perform in a format he has dominated over the years after getting the snub in the T20I series against England. The left-hander was in fine form in the last home series in India against Australia in 2020.