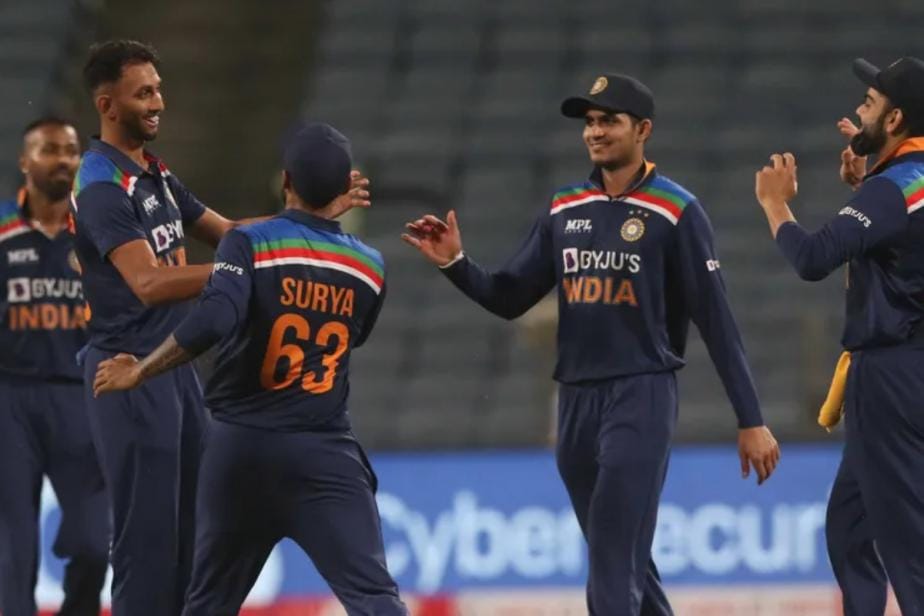 India engineered one of the finest comebacks to beat England in the first ODI by 66 runs in Pune. The Men in Blue set England a target of 318 and at one stage the visitors were on course for a huge win. Thanks to opener Jonny Bairstow’s 94 runs, the visitors had a head-start of 135 runs. More than that it came very quickly. Just 14 overs to be precise.

With plenty of wickets and overs in hand, it was England’s game to lose and lose they did! The game started to turn in Shardul Thakur’s second spell where he accounted for three wickets: Bairstow,  Eoin Morgan and Jos Buttler. Two of them came in the same over. With score reading 176/5, England went into a shell. Debutante Prasidh Krishna, who had gotten India the breakthrough, returned to complete his four-for. And then Bhuvneshwar Kumar struck in quick succession to knock the fight out of England’s chase.

Earlier batting first, India posted a mammoth total of 317/5. After Rohit’s departure, Dhawan took over and alongside Virat Kohli upped India’s scoring rate. Kohli got to his fifty and looked set for that elusive hundred since Nov 2019, but got out for 56. Dhawan looked set for a hundred too but once he reached the nineties he looked a different guy altogether. Runs were hard to come by and later he scooped an easy catch to mid-wicket for 98. Two short of a hundred which would have been nothing short of a statement.

With Shreyas Iyer too biting the dust, India were 201/5. And with just ten overs to go, the Men in Blue seemed to be losing the plot. But here stepped in another debutante…Krunal Pandya. He went after the bowler right from word ‘go’. He slammed Mark Wood for three boundaries in the same over and signaled that he is up for a fight. Alongside KL Rahul, he made sure India post a stiff total on board. While KL Rahul slammed 62 off 43 balls, Krunal became the fastest to reach fifty on ODI debut. It was a fitting start to India’s debutantes: Krunal and Prasidh as India managed to win the game from nowhere. Now only time will tell how their careers pan out.