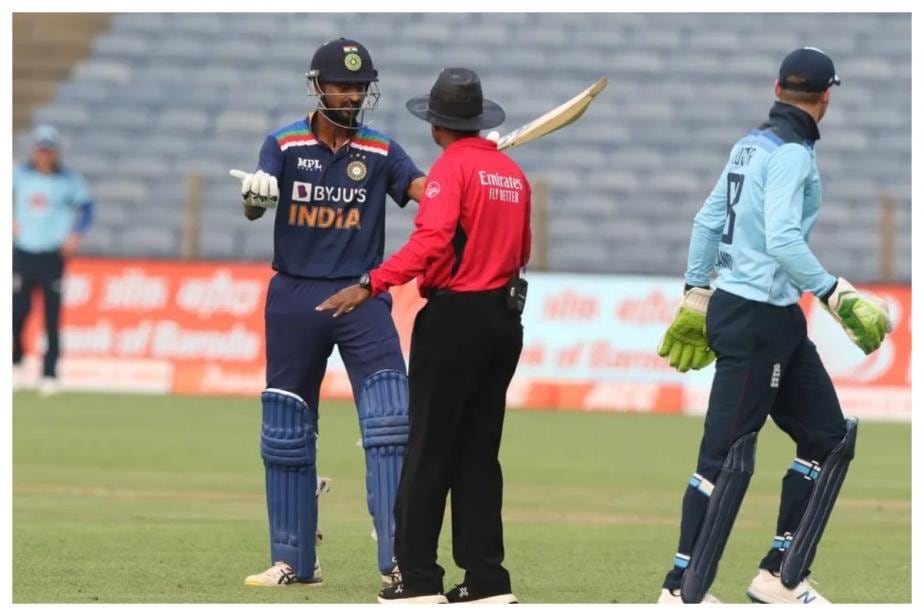 India registered a phenomenal win against England by 66 runs in the 1st ODI match of the three-match series. The team set an impressive target of 317 runs for England. Eoin Morgan-led team, on the other hand, got all out on 251 runs. Krunal Pandya, who played his debut ODI match for India, became the fastest debutant player to score an ODI fifty. The all-rounder slammed fifty off 26 balls. However, all was not rosy and nice for Krunal, as he got into a heated argument with England pacer Tom Curran.

In the video which is going viral on the internet, one can see that the two of them have got into a spat. It was perhaps quite intense because the umpire was seen intervening in the matter. As of now, the trigger of the argument is not known. While, Krunal and Curran were amidst their war of words, the cameras focused on Indian captain Virat Kohli. From his expressions, it can be easily interpreted that the captain was bemused by this episode which took place in the 49th over of the Indian innings. The match, which was high on emotion for Krunal, also saw him breakdown in the mid-innings interview. This happened after he became thefastest debutant player to score an ODI fifty, breaking New Zealand’s John Morris’ record of scoring 50 in 35 balls. He dedicated this special moment to his father, Himanshu Pandya, who passed away earlier this year due to a heart attack. Krunal remained unbeaten with 58 runs from 31 balls which also included seven fours and two sixes.

The Indian team, which enjoys the 1-0 lead in the ODI Series, has also been on the winning end of the T20I and Test tournaments. The Indian side managed a 3-2 win in the T20I and won the Test series by 4-1.

Other two ODI matches of the series are scheduled for March 26 and March 28 at the Maharashtra Cricket Association Stadium in Pune.

Opportunities Come But Will See Where it Goes, Sourav Ganguly Keeps it Open-ended on Joining Politics