The 2nd of April, 2011 remains one of the most glorious days in India’s history. MS Dhoni smashed Nuwan Kulasekara for a six to seal a historic victory and more than a billion people went into ecstasy. There was euphoria with tens of thousands celebrating outside the Wankhede dancing on Marine Drive and millions of others going absolutely delirious across the length and breadth of the country till the wee hours of the morning.

We look back at 5 crucial performances for India from the final in Mumbai. 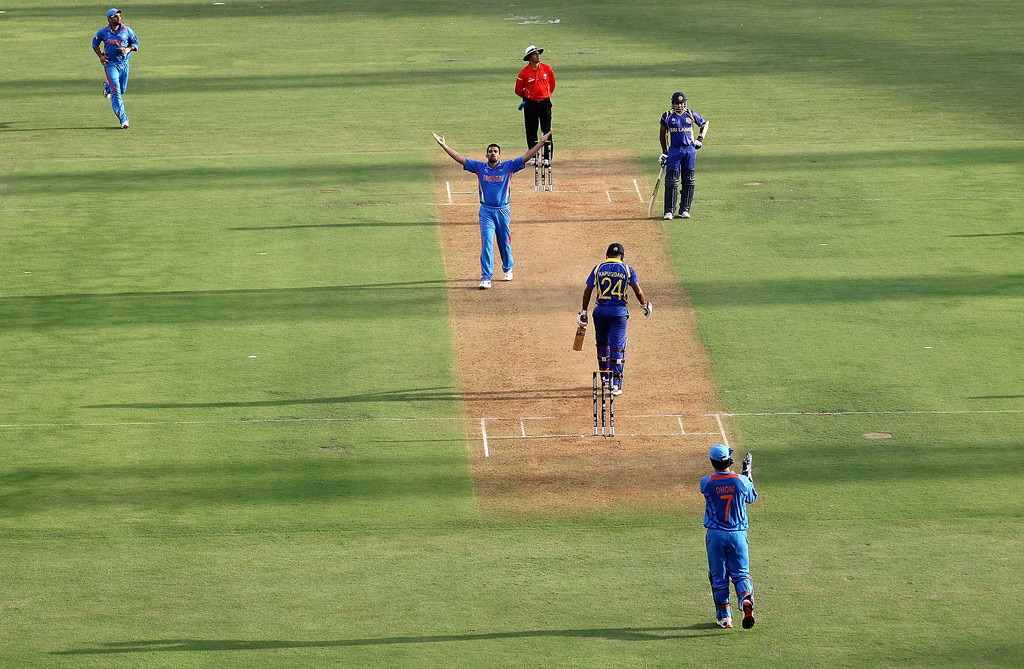 Zaheer Khan bowled a brilliantly restrictive spell with the new ball which did not allow Sri Lanka to get away to a flying start. He gave away just 6 runs and bowled as many as 3 maidens in his first 5 overs also picking the wicket of Upul Tharanga.

25 of his first 30 deliveries were dot balls – considering that this was the period of the mandatory powerplay with two of the best batsmen of the tournament at the crease – this was a phenomenal effort by Zaheer and went a long way in ensuring that Sri Lanka did not end up with a 300-plus total.

Virat Kohli was just settling into his ODI career and thus his contribution and what he did for India in the 2011 World Cup went largely unnoticed. In the final against Sri Lanka, he came out to bat at 31 for 2 with India in huge trouble when Tendulkar was dismissed. Not only was there panic and tension in the dressing room but there was gloom inside the stadium. This made Kohli’s task more difficult but he rose to the challenge. He made a crucial 35 off 49 deliveries and paired with Gambhir to resurrect the Indian innings putting together a match-changing 83 for the third wicket. The momentum swung in India’s favour and they never looked back.

This ability to absorb the pressure of early wickets and rebuilding an innings gave a glimpse of his character, determination and resolve. It was not the first time that Kohli had got India out of trouble in the tournament. From 21 for 2, he had partnered with Tendulkar and stabilized the Indian innings with a patient 34 off 53 deliveries against an Ireland team that had upset England. He had then resurrected the Indian innings from 8 for 1 (which had worsened to 51 for 2) against the West Indies adding 122 with Yuvraj Singh. Pakistan in Johannesburg in 2007) spoke volumes of his big-match temperament and ability – the quality to produce your best on the biggest stages.

Gambhir actually gave a higher impact performance with the bat than Dhoni in the final. According to Impact Index, he had a 4% higher Batting Impact than Dhoni. The left-hander registered 4 fifties, one thirty and three scores between 20 and 30 in the tournament and was India’s most consistent batsman in the World Cup.

4. DHONI’S MASTERSTROKE TO PROMOTE HIMSELF

MS Dhoni was in very poor form in the World Cup getting into the final. He had aggregated just 150 runs in 7 innings at an average of 30 and strike rate of 69.44. He hadn’t scored a single 40-plus score in the tournament. Neither was he getting any significant scores nor was he producing those cameos.

In contrast, Yuvraj Singh was in excellent form and had mostly batted at 4 or 5 in the tournament. Thus, at 114 for 3, when Dhoni promoted himself ahead of the in-form Yuvraj, it raised a lot of eyebrows and there were murmurs of what a ‘terrible’ decision it was. The rest is history. Dhoni gambled, took a calculated risk and it paid off. But there was a rationale and cricketing acumen behind his decision as was later revealed. Having had the experience of facing the two premier Sri Lankan bowlers – Malinga and Muralitharan – in the nets for CSK in the IPL, Dhoni promoted himself to counter any threat from them in the middle overs. In particular, he wanted to tackle Muralitharan who may have posed some problem to Yuvraj taking the ball away from him.

It turned out to be a masterstroke!

5) YUVRAJ HAD ALMOST THE SAME IMPACT WITH THE BALL Yuvraj Singh – the man with the golden arm in the World Cup – broke two partnerships at critical junctures in the final. He got rid of Sri Lanka’s best batsman – Sangakkara – ending a threatening 62-run third-wicket stand between him and Jayawardene before returning to trap Samaraweera just when Sri Lanka looked set to go for the kill in the death.

Yuvraj displayed this knack of picking wickets of big opposition batsmen at crucial stages in the match throughout the tournament. He had bagged the wickets of Asad Shafiq and Younis Khan in successive overs in the semi-final changing the match on its head. Overall, he picked 15 wickets from 9 matches and was India’s second-highest wicket-taker behind Zaheer Khan.

This, coupled with his batting (362 runs in 8 innings including 4 fifties and a hundred) made him the highest impact player of the tournament. Interestingly, his Bowling Impact was almost as high as his Batting Impact in the World Cup!

IPL 2021: ‘Why Not Give Kedar Jadhav A Chance?’ Asks Pragyan Ojha After SRH Loss to Mumbai Indians