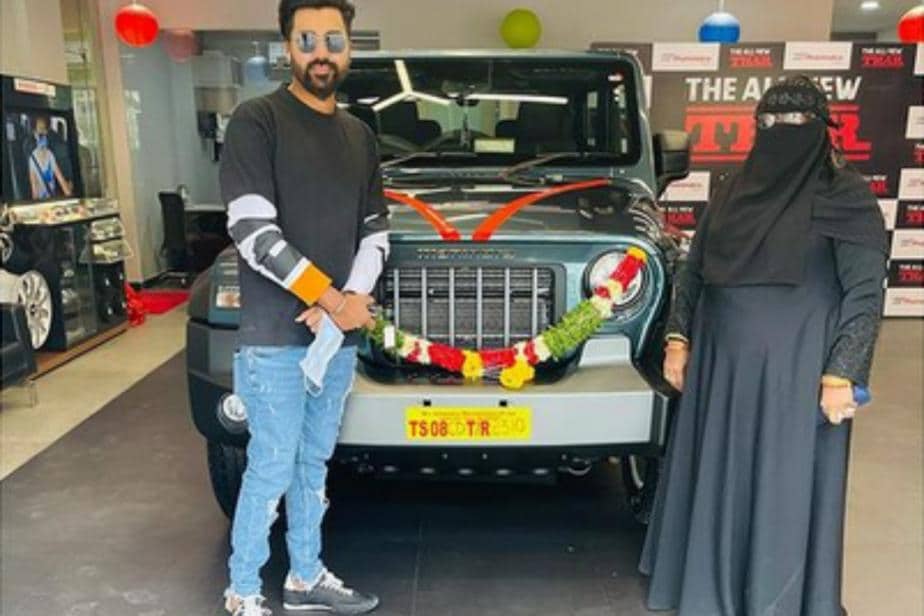 India pacer Mohammed Siraj thanked industrialist and Chairman of the Mahindra Group, Anand Mahindra, after being gifted an SUV for his brilliant returns and heroics in India’s sensational Test series win Down Under earlier this year. Siraj was the highest wicket-taker for India in the series and also led the Indian pace attack in the absence of the quartet.

Siraj is currently in Chennai training with the RCB unit for the upcoming IPL 2021 which gets underway from the 9th of April and stated that the SUV, Mahindra Thar was received in Hyderabad by his brother and mother.

The latest Indian pace sensation tweeted a picture of his brother and mother receiving the SUV in Hyderabad.

“Words fail me at this moment. There is nothing I can say or do that will adequately express how I feel about your beautiful gift @mahindrathar.  For now, I’ll just say a big fat thank you #Anandmahindra sir. Unfortunately I was not available so this beast was received by My Mother and my elder brother,” said Siraj.

Anand Mahindra has gifted Thar SUVs to 6 India players, including 5 who had made their debut in the sensational series Down Under.

Siraj returned with 13 wickets in three Tests in Australia and impressed everyone with his pace and accuracy. He bowled with a big heart and got India the crucial breakthroughs at critical junctures. He bagged five wickets in Australia’s second innings at the Gabba playing a leading role with the ball in India’s historic victory.

IPL 2021: I Am Second Highest Wicket Taker in IPL, What Else Can One Do? – Amit Mishra

Yorker and limited overs’ specialist, T Natajaan had also extended his courtesies to Anand Mahindra after receiving an SUV from the businessman. In a sweet gesture, the left-armer sent his signed Gabba Test jersey as a return gift.

“Playing cricket for India is the biggest privilege of my life. My #Rise has been on an unusual path. Along the way, the love and affection I have received has overwhelmed me. The support and encouragement from wonderful people, helps me find ways to explore the impossible.”

“As I drive the beautiful @Mahindra_Thar home today, I feel immense gratitude towards Shri @anandmahindra for recognising my journey & for his appreciation. I trust sir, that given your love for cricket, you will find this signed shirt of mine from the #Gabba Test, meaningful,” Natarajan tweeted.