SRH vs KKR Live Score, IPL 2021, Match 3: Only Two Teams With Foreign Captains Battle It Out 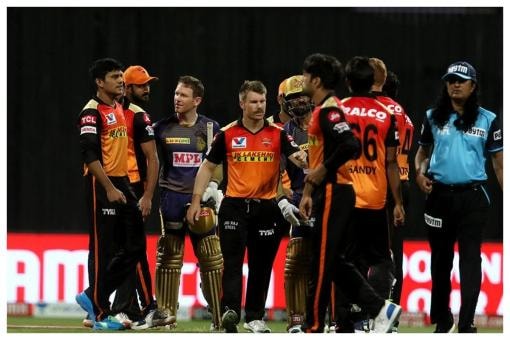 IPL 2021, Live Cricket Score, Sunrisers Hyderabad vs Kolkata Knight Riders (SRH vs KKR): David Warner’s SRH and Eoin Morgan’s KKR will take on each other in Chennai in Match 3 of IPL 2021

In match number three of the ongoing Indian Premier League, two-time champions Kolkata Knight Riders will take on Sunrisers Hyderabad at the MA Chidambaram Stadium. The Shahrukh Khan co-owned side finished fifth last season and missed out on the playoffs due to poor run-rate as compared to Sunrisers Hyderabad and Royal Challengers Bangalore who finished third and fourth respectively. All three of these teams finished with 14 points after the league stage. This time around with Eoin Morgan at the helm right from the beginning the Knights would be hoping to qualify as one of the top four teams and eventually win the trophy for the third time.

Eoin Morgan’s team will start the contest with a better head-to-head record; 12 wins from 19 matches. However, on paper, David Warner’s side looks stronger.

Last season the Kolkata-based team suffered a lot due to the over-dependency on Andre Russell as the West Indian suffered a torrid season in the UAE. This year, they have strengthened their squad, especially the middle order with trustworthy Bangladeshi all-rounder Shakib-Al-Hasan. They also roped in the Karun Nair in the IPL 2021 auction.

In the batting department, a lot will depend on how Shubman Gill gives them a start and how his successors maintain the momentum. Their big guns need to fire against a strong SRH bowling line-up.

With Harbhajan Singh and Ben Cutting added to their squad, their bowling looks to be their strongest point this season.

The Orange Army have been one of the most consistent sides in the history of the IPL. Last year they made it to the playoffs despite a struggling middle-order and a weakened bowling line-up. This year have added experienced Kedar Jadhav to address their middle-order concerns and they have Bhuvneshwar Kumar available for the tournament.

It is just not that they have a formidable bowling line-up which consists of T Natarajan, Bhuvneshwar Kumar, Rashid Khan, Sandeep Sharma to name a few. They also have an equally impressive batting line-up led by swashbuckling Aussie southpaw David Warner, his opening partner Jonny Bairstow, Kane Williamson, Manish Pandey among others.

Notably, Bairstow has been in great form and is already warmed up after success in the recent limited-overs series against India.

WHERE: M. A. Chidambaram Stadium, Chennai

PLAYERS TO WATCH OUT FOR