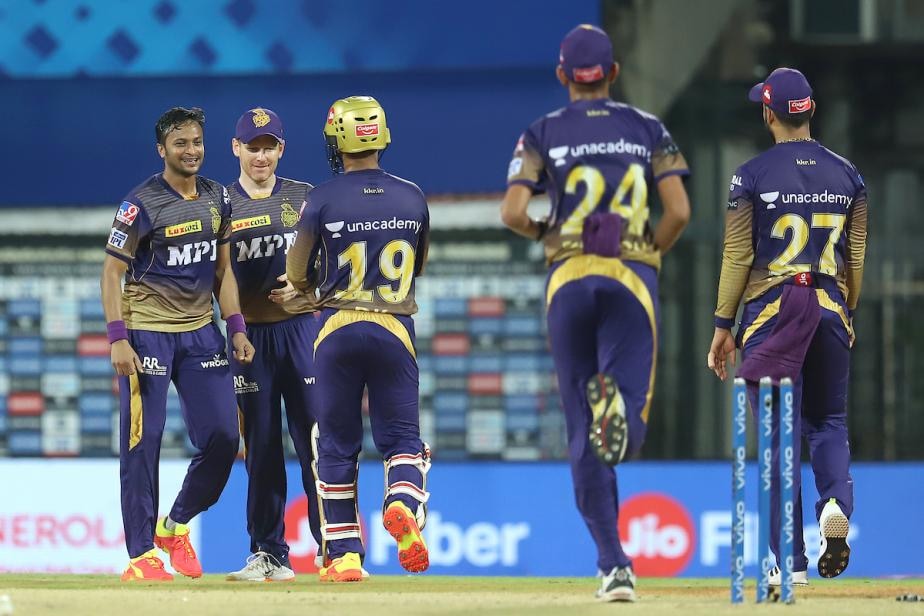 Half-centuries from Nitish Rana and Rahul Tripathi set up Kolkata Knight Riders’ 10-run win over Sunrisers Hyderabad in the IPL 2021 match at the M.A.Chidambaram Stadium on Sunday. Rana (80 off 56) and Tripathi (53 off 29) powered KKR to 187 for 6 in 20 overs, before Manish Pandey (61* off 44) and Jonny Bairstow (55 off 40) took SRH close. However, they couldn’t quite finish the steep chase.

Coincidentally, this was also the Knight’s  100th win in the Indian Premier League and KKR co-owner Bollywood megastar Shah Rukh Khan took to Twitter to express his happiness following his side’s century of wins in the cash-rich league.

“Good to have our 100th IPL match win. Well done boys…@KKRiders @prasidh43 @DineshKarthik @NitishRana_27#Rahul @Russell12A @harbhajan_singh ( good to see u even if briefly ) @Sah75official @patcummins30 actually all were so good to watch,” Shah Rukh Khan tweeted. During the chase, SRH needed David Warner to fire in the chase but that didn’t happen. He was dropped on 0 by Pat Cummins off Harbhajan Singh but couldn’t make use of the life, nicking an excellent delivery from Prasidh Krishna to the keeper in the second over. In the next over, Wriddhiman Saha chopped Shakib Al Hasan onto the stumps to leave them 10 for 2.

SRH needed a partnership to stay in the game and they got that with Jonny Bairstow and Manish Pandey settling down and then counter-attacking. Hyderabad added only 35 in the Power Play but switched gears, bringing up their 100 in 12 overs. Bairstow was leading the onslaught, having crossed his half-century.

With the partnership growing, KKR turned to Pat Cummins for the breakthrough and he didn’t disappoint. He got Bairstow cutting to point leaving SRH 102 for 3 in 13 overs.

SRH sent Mohammad Nabi up the order to accelerate but he managed only 14 off 11 before falling to Prasidh Krishna. SRH needed 57 from the final 4 overs, which was a bit too steep. Vijay Shankar fell for 11 off 7, and Abdul Samad hit Pat Cummins for two incredible sixes in the penultimate over to bring it down to 22 off the final over.

However, Andre Russell did the job for KKR in the final over.

KKR looked set for a total well above the 200-run mark when their top order batsmen Nitish Rana (80), Rahul Tripathi (53) and Shubman Gill (15) took on the SRH bowlers. However, SRH’s Afghanistan duo Rashid Khan (2/24) and Mohammad Nabi (2/32) led the way in the death overs.

Rana and Gill put up a 53-run opening partnership off 42 balls before the latter fell to Rashid. However, Rahul Tripathi then came in and scored a belligerent 53 off 29 balls, smashing five fours and two sixes. Tripathi put up 93 runs off just 50 balls for the second wicket with Rana.

Tripathi eventually fell to T Natarajan and with the team cruising at 146/2 in the 16th over, KKR sent in Andre Russell ahead of Shakib Al Hasan. However, Russell ended up falling for just five runs off as many balls to Rashid after which Nabi dismissed Rana and KKR captain Eoin Morgan off consecutive deliveries in the 18th over.

Dinesh Karthik then scored 22 runs off nine balls to get KKR close to the 190-run mark while Shakib fell to Bhuvneshwar Kumar off the last ball of the innings.

IPL 2021: ‘It Was Shocking to See’ – Sanju Samson Explains What Went Wrong for RR vs CSK