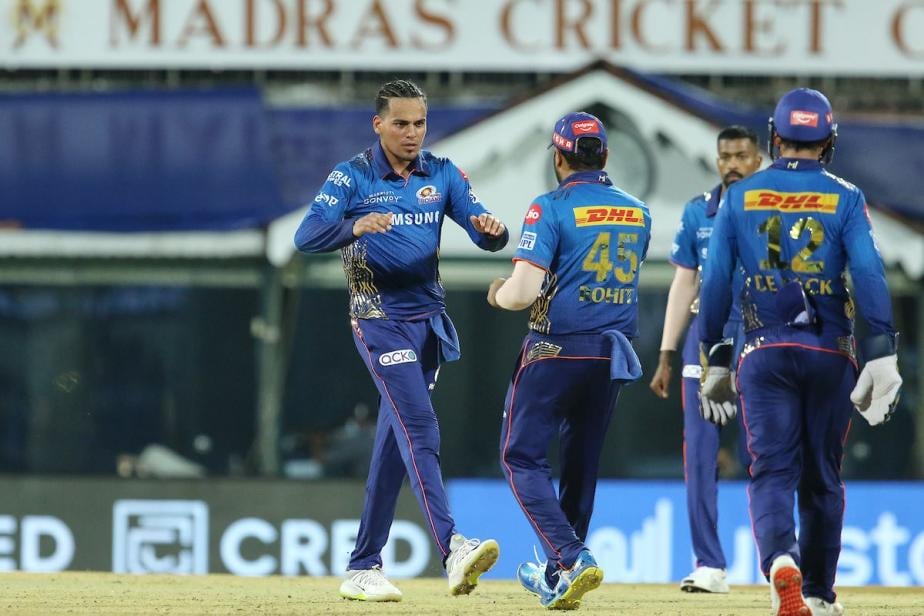 For the second time in a row, Mumbai Indians posted a modest total batting first in Chennai, were batted out of the match in the first half of the opposition chase and then fought their way back in the middle overs with an inspired spell from their bowlers. Talk about patterns repeating themselves and once again it was the young leg break bowler, Rahul Chahar, who bamboozled the Sunrisers and picked three big wickets to shift the momentum of the match in the favour of Mumbai Indians.

Chahar first saw the back of the Mr Consistent in the top-order for the Sunrisers – Manish Pandey as the batsman holed out to Kieron Pollard at long off. SRH had been given a blazing start by David Warner and Jonny Bairstow but lost the Englishman in the previous over and the leg-break bowler had now made it into a double blow for the franchise.

From 49 needed off 36 deliveries with seven wickets in hand, the odds were still heavily in favour of the Sunrisers. Till Chahar delivered the 15th over. He first got rid of the hard-hitting Virat Singh with a googly getting him caught at long-off. Chahar then struck for the second time in the over dismissing Abhishek Sharma caught at deep backward square leg attempting a slog sweep. Two wickets in the 15th over of the match conceding just two runs! The match changed on its head. The momentum completely shifted in the favour of Mumbai Indians.

Chahar finished with 3-19 in 4 overs. He had again picked three massive wickets at a crucial juncture in the middle overs and was brilliantly restrictive giving away at a rate much lower than the match norm. With 47 needed off 30 balls with just five wickets in hand with an inconsistent lower-order, the match was now in the grasp of the Mumbai Indians. This is the reason that Chahar had a higher impact than the official Player of the Match, Kieron Pollard.

Pollard made a mini-statement with a cameo 35 off 22 deliveries hammering himself back into form. His innings included three towering sixes and was the difference between a par score of 135 and a match-winning one of 150 on a slow and spinner-friendly Chepauk wicket. Pollard also chipped in with two economical overs in the middle over period for Mumbai Indians.

But in the final analysis, it was Chahar’s spell which turned the match around for the Mumbai Indians and shifted the course of the match in their favour.​

Chahar was also the highest impact player for Mumbai Indians against the Knight Riders and produced an inspired spell picking 4 wickets in as many overs in the middle overs changing the match on its head which ultimately gave his team a stunning 10-run win in a match they had all but lost till he came on to bowl.

Wriddhiman Saha Back Among His Loved Ones, Shares Adorable Picture