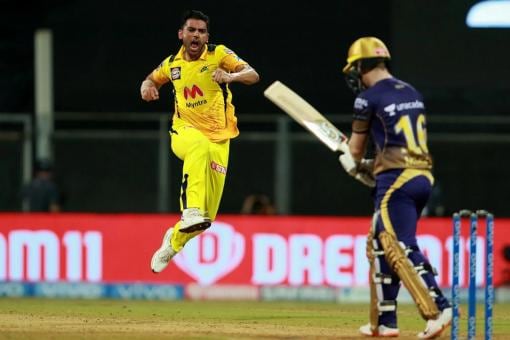 Live Score KKR vs CSK: KKR 200 All out. And CSK have survived Pat Cummins scare. Prasidh Krishna is runout and KKR are bundled out for 200 runs. Not to forget what a comeback they staged. They were once 32/5.

CSK have had a good start to the season. They have played some fine all-round cricket in all the three matches and ended up victorious in two. The difference between CSK of 2020 and 2021 has been the combined effort of 8-10 in-form players. Faf du Plessis has provided them with the starts, Suresh Raina, Ambati Rayudu, Ravindra Jadeja and Moeen Ali have all chipped in with significant performances in the middle order.

The only concern is the form of Ruturaj Gaikwad at the top of the order – he has failed in all the three matches. Ali has been their trump card and surprise package. He has come up with three high impact batting performances from number three which also returning with crucial wickets and being restrictive in two of the three matches. MS Dhoni has pushed himself down to number 7 with the team not needing his services so far.

KKR got off to a winning start but since then have lost their way a little. Nitish Rana has been their standout batsmen with two fifties in three matches but a lack of contribution from other big names in the top and middle order is hurting the franchise.

Shubman Gill has got a start in each of the innings but failed to convert it into a significant match-defining score – he needs to come up with a big performance. Gill also had an ordinary outing in the UAE for KKR in 2020. Eoin Morgan is not playing to his potential and has failed in two of the three matches. Andre Russell gave a glimpse of his destructive prowess against the Challengers but it was a case of too little too late. Russell is still nowhere near the batsman he was for KKR in IPL 2019 and this is hurting the franchise.