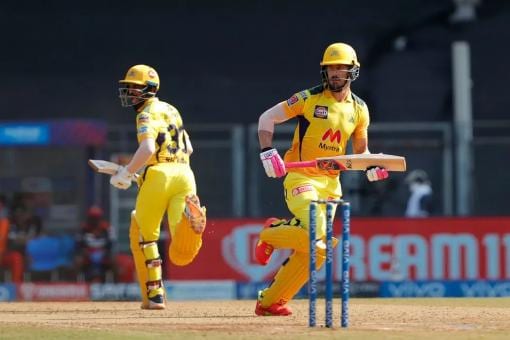 CSK vs SRH Live Score, IPL 2021 Today’s Match: The clash between Chennai Super Kings and Sunrisers Hyderabad will have more focus on the venue than the actual contest itself. Such is the reality of this edition of the IPL being played under a strict bio-bubble even as Covid-19 surges across the length and breadth of the country. The national capital has been the worst-hit city in India during the second wave of the pandemic and the teams would find it hard to focus on the match at the Arun Jaitley Stadium given what is happening outside the protected fortress.

Coming back to the cricket and CSK seem to have reversed their fortunes and sit pretty in second position with 4 wins from 5 matches. What is impressive is the brand of cricket they have played with several match-winning performances both from the bat and ball. Their net run rate, at 1.612, is by far the best in the tournament. Sunrisers, on the other hand, have had a terrible start to the season and lost 4 of their first five encounters.

CSK lost their opening encounter to the Capitals but since then have won four on the trot and have looked close to the all conquering side they have been in the IPL notwithstanding their performance in the last edition. The main difference between 2020 and 2021 so far has been their batting – it is clicking big-time this season. CSK have posted in excess of 180 in 4 of the 5 matches in the tournament. All their four wins have been by comfortable margins which suggests that they are dominating the opposition.

Just like UAE 2020, Faf du Plessis has been their star with the bat so far in 2021 too. The South African has aggregated 214 runs in 5 innings at a strike rate of close to 140 with two fifties. He has provided the big scores at a high rate at the top of the order for CSK which has given the middle order a platform to push for a match-winning score. Moeen Ali has been a revelation with the bat and has provided the impetus with cameos from number 3 – he is striking at 152.87 per hundred balls in the competition.

Ravindra Jadeja showcased why he is now amongst the best finishers in the game with a breathtaking fifty against the Challengers which included taking 37 off the last over bowled by Harshal Patel. The only concern would be the form of Ambati Rayudu – he needs a substantial score in the middle order.

Deepak Chahar has been the pick of the fast bowlers for CSK. He has picked two four-wicket hauls already in the tournament. Jadeja and Ali have been brilliantly restrictive with an economy rate of 6.05 and 6.33 respectively. Imran Tahir impressed in his first match of the season against the Challengers.

SRH need to take some drastic measures to get them out of the hole they find themselves in. Jonny Bairstow has been their standout batsman and has scored 211 runs at a strike rate of almost 142 but there has not been much contribution from the rest of the line-up.

David Warner is still struggling to get the big runs and score quickly simultaneously – like he did last year too. The Australian southpaw has just managed just 136 runs in 5 innings at a strike rate of 113.33 with one fifty-plus score. Manish Pandey started well but was surprisingly dropped from the last couple of matches – a poor decision given his record and given that SRH lacks experience in the middle order.

The return of Kane Williamson has given a boost to the top order but there has to be more contribution from the middle order – the likes of Vijay Shankar, Abdul Samad, Virat Singh and Abhishek Sharma need to do more with the bat for SRH.

Rashid Khan has been outstanding, as usual for SRH this season too. He has picked 6 wickets at an economy of just 5.6! Khaleel Ahmed has been generally restrictive but went for a few in the last match but the biggest disappointment has been the form of Bhuvneshwar Kumar. The veteran pacer has just bagged 3 wickets in 4 matches and gone at an economy of 9.06 per over. He was rested from the last encounter due to a thigh strain and may sit out against CSK too.

Sandeep Sharma was dropped after a bad first match of the season in which he was taken for a few but given his experience and prowess with the new ball, the right-armer needs to be drafted back into the XI.